The Support Staff Endowment Fund
What is it?

How is the Support Staff Endowment Fund disbursed?

The Twelve member Support Staff Endowment Fund Advisory Committee which consists of equitable representation of union and non-union support staff from both the Bannatyne Campus and the Fort Garry Campus is responsible for making recommendations to the President's designate for disbursement.  The committee currently makes plans for at least one annual field trip, and calls for applications from support staff for both individual and project awards once a year.

How can I benefit from the Support Staff Endowment Fund?

Since the establishment of the fund in 1988 many workshops, seminars series, individual book awards and field trips have been supported.

Individual Awards
- Annually the committee calls for the applications for Individual Awards.  The awards are granted as reimbursement for book purchases to staff members who are upgrading their skills through non-credit or degree courses.

Project Awards
- The committee also calls for applications for Project Awards. Projects that have been awarded funding in the past have included; staff development workshops, funding for the creation of a training video, seminar series on communication, wellness and equity and human rights.  This year funding was granted to support a Physical Plant staff development workshop, and a Visual Communications Workshop on Basic Design & Layout hosted by CHERD.

Field Trips
- Many successful and popular field trips to the Delta Marsh and the snake pits have been organized by the committee in past years.  Most recently the Support Staff Endowment Fund organized an exchange trip to the University of Minnesota, Alberta, McGill, BC, and Ottawa which provided opportunities for support staff to exchange ideas with their US and Canadian counterparts.

How could a few dollars from me make a difference?

All activities are funded using the interest income generated from the Support Staff Endowment Fund. Currently, there are approximately 2,500 support staff employed at the University of Manitoba.  If each support staff member donated $3 per pay cheque for the next year, the fund would more than TRIPLE in size.  The increase in the size of the fund would obviously generate substantially larger amounts of interest income enabling the Support Staff Advisory Committee to broaden the scope of support to include funding for staff to attend conferences, additional support for out-of province field trips, and financing for larger staff development projects.

Help build your fund for the future! 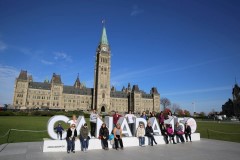