Home
A Brief History of the Department

The Department of Icelandic Language and Literature began with the appointment of a Chair in 1951.  This Chair came about in large part due to the North American Icelandic community’s support and donations to an Endowment Fund.  With the Endowment Fund, the University of Manitoba agreed to teach Icelandic courses and established a Professorship in Icelandic Language and Literature for that purpose. Throughout its 60+ history, the department has had a number of distinguished researchers and educators fill the role of head of department and/or chair of Icelandic Studies.

Dr. Finnbogi Gudmundsson was the first Chair of Icelandic from 1951 to 1956 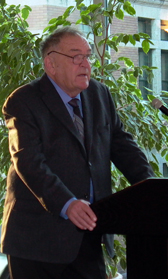