The Bison Men's Chorus has been in operation since September 1985. It is a community-based chorus made up of singers from Winnipeg and the surrounding area many of them students, faculty, staff and alumni of the University of Manitoba . The repertoire consists of traditional male chorus selections, spirituals, jazz arrangements, folk and art songs, sacred music, show pieces and commissioned works.

The group has recorded 3 tapes and 4 CD's. The most recent, recorded over the 2009-2010 season is entitled He⋏𝒶rd Across Canada.

The Chorus also keeps very busy with performances outside of their own schedule. They have performed Haydn’s Creation along with the University of Manitoba Women’s Chorus and University Singers, with featured soloists Tracey Dahl, Mel Braun and Robert McLaren, and the University of Manitoba String Orchestra under the baton of Earl Stafford. The Bison Men performed with the WSO under Henry Engbrecht in the recent performance of Mendolssohn’s “Elijah”. As well, the Chorus participated in the Opening Ceremonies of the Arthur Mauro Center for Peace and Justice as a part of the 250 voice choir and instrumental ensemble under the direction of Zane Zallis.

The Chorus hosts an annual “Advent-Eve” Feeste which has grown steadily in the past few years to an event with 280 guests, musical and theatrical entertainment, and great deal sing-a-long and good fun. Also, the Chorus presents at least one Christmas Concert, the proceeds of which are always donated to local charities.

At both the 2012 and 2017 Winnipeg Music Festivals the Chorus was awarded the Helga Anderson Trophy for "the most outstanding performance by an adult community choir".

The Bison Men’s Chorus is essentially a group of men who sing for the love of good music and fellowship. 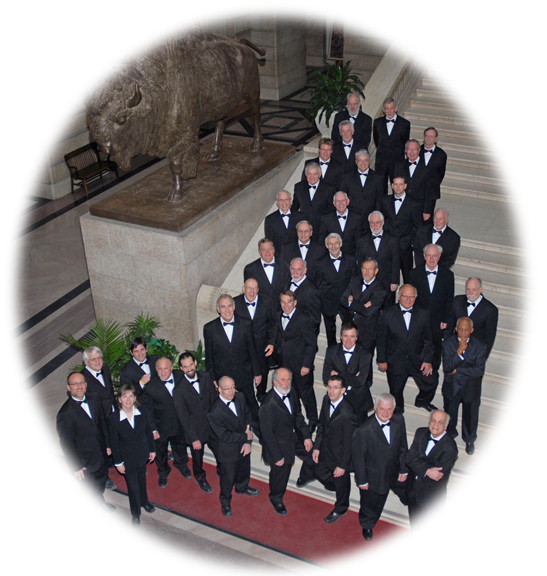