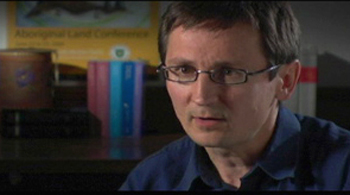 Bio:
Dr. Kulchyski is a Full Professor. He is originally from Bissett, Manitoba, and went to the government-run residential school Frontier Collegiate in Cranberry Portage, MB. He has taught in Native Studies departments at the University of Saskatchewan and Trent University   He joined the Department of Native Studies at the U of M in 2000. His research interests include Aboriginal cultural politics, political development in the Canadian Arctic, land claims and self-government, Indigenous rights, contemporary critical theory, and political performance art. He is on the Steering Committee of Wa Nis Ka Tan, an alliance of hydro affected Indigenous communities, and co-director of the Canadian Consortium on Performance and Politics in the Americas. Dr Kulchyski is the recipient of the 2017 Dr John M Bowman Memorial Winnipeg Rh Institute Foundation Award.

At the University of Manitoba's "Revolutions" conference in 2017, Dr. Kulchyski gave a keynote talk regarding the significant challenges to global capitalism that are offered by indigenous peoples.  To hear that talk, please click here.

Report of an Inquiry into an Injustice: Begade Shuhtagotine and the Sahtu Treaty. Winnipeg; University of Manitoba Press, 2018.

aboriginal rights are not human rights and other essays on law, politics and culture. Winnipeg; Arbeiter Ring Press. Winter 2013.

the red indians: an episodic, informal collection of tales from the history of aboriginal people's struggles in canada (winnipeg: arbeiter ring press, 2007).

Like the Sound of a Drum: Aboriginal Cultural Politics in Denendeh and Nunavut. Winnipeg; U Manitoba P, 2006.

In the Words of the Elders: Aboriginal Cultures in Transition. Toronto; U Toronto P, 1999. Co-edited and co-wrote the introduction, with Don McCaskill et.al.

“Rethinking Inequality in a Northern Indigenous Context: Affluence, Poverty, and the Racial Reconfiguration and Redistribution of Wealth”, The Northern Review. No 42. 2016.

“The Incalculable Weight of Small Numbers: Hunters, Land Use, and the Poplar River First Nation Proposal for a World Heritage Site” with Agnes Pawlowska. International Journal of Canadian Studies. 52, 2015.

“Idle No More and the History of Aboriginal Dissent” Translated into French by Thomas Chaisson-LeBel for Nouveaux Cahiers du Socialisme, Spring 2013.

“bush/writing: embodied deconstruction, traces of community and writing against the state in indigenous acts of inscription” in Shifting the Ground of Canadian Literary Studies, Edited by Smaro Kambuoreli and Robert Zacharias, Waterloo; Wilfred Laurier UP, November, 2012.

“Echo of an Impossible Return: An Essay Concerning Fredric Jameson’s Utopian Thought and Gathering and Hunting Social Relations” in The Politics of the Impossible: Utopia and Distopia Reconsidered. Edited by Barnita Bagchi New Delhi; Sage Books, 2012.

“A Step Back: the Nisichawayasihk Cree Nation and the Wuskwatim Project” in Power Struggles edited by Thibault Martin and Steven M Hoffman. Winnipeg; U Manitoba P, 2008.

“hunting stories” in The Culture of Hunting, edited by Jean Manore. Vancouver; U British Columbia P, 2007.

"Bush Culture for a Bush Country: An Unfinished Manifesto". Journal of Canadian Studies. Vol 31, No 3, Fall 1996.

"Anthropology at the Service of the State: Diamond Jenness and Indian Policy in the Early Twentieth Century". Journal of Canadian Studies. Fall, 1993.

"The Postmodern and the Palaeolithic: Notes on Technology and Native Community in the Far North". The Canadian Journal of Political and Social Theory. Vol. 13, No. 3 (1989).