The Weisman collection of Pre-Columbian medical sculpture was presented at Gallery 1.1.1. through a touring exhibition by the National Library of Medicine. Dr. Abner I. Weisman, an American gynecologist, had assembled a large collection of pre-Columbian. Beginning in 1936, Weisman began travelling through the Americas following his curiosity about pre-Columbian medical practices. He acquired through trade and purchase numerous artifacts depicting what he believed were various medical conditions represented in small sculptures. 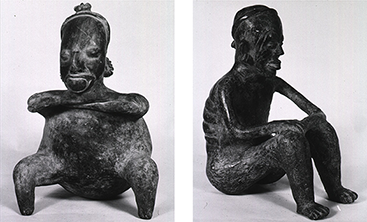 Image: Two figures from the Weisman Collection possibly included in the exhibition. Both are originate in Mexico. n.d. The sculpture on the left is described as a seated figure with enormous swollen abdomen and a large "bubble" in the oral cavity. The figure on right is described as a seated old man with facial wrinkles, emaciated thorax, and prominent ribs and spine; hands resting on knees.  The National Library of Medicine believes this item to be in the public domain.