A poetry workshop with Sally Ito and Jennifer Still

On November 21st at the U of M’s School of Art Gallery, the Centre for Creative Writing and Oral Culture hosted “Ekphrastic Encounters”, a poetry workshop co-facilitated by 2012 Writer-in-Residence Sally Ito and myself in which eight participants entered the poetic act of ekphrasis: the art of responding to a visual work through words.

We began with a definition offered by Willard Spiegelman1 in which he suggests ekphrasis as “(t)he art of which the poet speaks….what the poet sloughs to get at, something new—like a snake shedding its skin. The poet gets farther away from the original image while simultaneously revealing a new layer underneath. What disappears (the former image, the entire painting) is replaced by a new work, the poem.”

And the poem is just what we set out to find upon visiting Re-Configuring Abstraction, (curated by Mary Reid), a collection of abstract visual art by Winnipeg artists Derek Dunlop, Dil Hildebrand, Krisjanis Kaktins-Gorsline and Holger Kalberg. Our intention was to spend 45 minutes engaging with the artwork in such a way that would enable a voice in us, an impression that would fall into language. We were curious students who had signed up for a very private meeting—our poetic voices with a strange, new landscape.

Spiegelman, in his definition, was referring specifically to ekphrasis of abstraction. The challenge of poetically representing the nonrepresentational. In curator Mary Reid’s introduction to the exhibit, she describes abstraction as a mode that “centers on the conflation of the figure-ground relationship, which goes back to the very core of what is considered abstract painting: where confusion occurs between what is the subject and what is the object.”

This figure-ground confusion is interesting to note when considering the variety of responses shared here. Some of us came away with poems that seem like the wet-paint equivalent of words; impressions and gestures so malleable they might slip into another meaning – or, even language – at the slightest turn (see Gerry Wolfram’s “flesh made chair” in “Sky scrap”, a response to Kalberg’s Prop 1). Or Susan Magnusson’s “Protopoem to Prop 3” in which the movement is narrative, historical, anachronistic—an imagined dance between two artists of the past: Pablo Picasso and Barb Hepworth.

Other encounters seem to be working at the underpainting of it all, as if peeling back the image to find the landscapes, motions, original gestures that lay beneath: “yes, a thought of movement / in the pines along the western shore / straight as the teeth of a comb” writes Joanne Epp on Kaktins-Gorsline’s Zummad. Or, as in Ron Romanowski’s response to the same painting, ekphrasis as an attempt to glimpse through to the artist himself: “This is paint much troubled about.”

Too were the reverse responses—those of the poet whose outward gaze found a more internal context as in Margot Block’s investigative encounter with Kaktins-Gorsline’s Inspector: “I am reminded of the careful blue like a skeleton key to the memory of it all”.

And then there were the careful attentions to the harder, more material surfaces of the works, such as the coded, staccato strokes of Derek Dunlop’s systematic (white), which seems to embody a patterning that insists itself rhythmically and imagistically in the resulting poems: “the Spanish steps—themselves never truly white” (Romanowski).

Dunlop’s textured openness enables both a micro and macro perspective in Ted Landrum’s series “Systematic Encounter”. Here the larger social space is addressed within the posts and beams of a typographic poetry; a plurality in a conversation of mythic (and glyphic!) proportions. Landrum’s ekphrasis is indeed an act, a dynamic gesture that offers a lived, three-dimensional moment; a playful, sonic and textual response not just to a painting, but rather to the artistic pointing of the event itself—the arrangement of the whole, the staged exhibit that composes the artistic moment: the gallery, the workshop, the poem, a linguistic architecture.

The following collection of submissions is made possible by the generosity of curator Mary Reid who had the brilliant vision to gather our poems here together. And to the participants, for their curiosity, openness and thoughtful practice: thank you for sharing your work, your encountered words. Indeed Spiegelman’s definition could be applied to your poems: skins (canvasses) were shed and new works emerged. 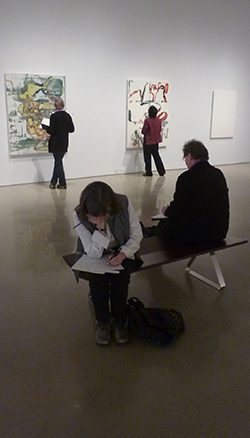