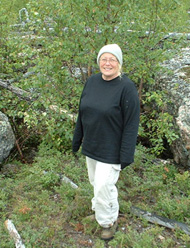 The amount of turquoise recovered from southwestern United States and Mesoamerican archaeological sites suggests that the procurement and exchange of turquoise was an important part of these pre-Columbian cultures.  For decades, archaeologists have sought to chemically characterize turquoise deposits.  However these studies have met with limited success due to intrinsic limitations of trace element analyses of compositionally complex minerals such as turquoise.  For my master’s research I developed a technique to identify turquoise deposit using the isotopic ratios of hydrogen (2H/1H) and copper (65Cu/63Cu), measured by a Secondary Ion Mass Spectrometer.
I am currently working with Dr. Mostafa Fayek to expand the research that was completed for my master’s thesis.  This project, funded by an NSF grant, will include two significant stages.  The first stage includes refining the sourcing technique and characterizing each known turquoise deposit in the American Southwest and northern Mexico.  The second stage includes analyzing turquoise artifacts from different sites in the Anasazi culture area; including sites from Chaco Canyon, and the Salmon and Aztec sites located near the San Juan River.  The identification of the source areas of the turquoise artifacts can help in the reconstruction of turquoise exchange networks through time allowing new insight into population shifts during the “collapse” or reorganization of the Chacoan system around A.D. 1150.  Although, the main focus will be on Chaco Canyon, Aztec, and Salmon, artifacts from other parts of the American Southwest and Mexico will be analyzed to begin reconstruction of pre-Columbian turquoise exchange networks on a much larger scale.
The use of stable isotopes is a relatively new technique in archaeological research and is being applied to other materials provenance studies.  I was invited to participate in an important research study supported by an Aboriginal Research SSHRC grant through the Manitoba Museum that encompasses a large research team working with the Pickerel Narrows First Nation, Grandville Lake, Manitoba that combines interdisciplinary research that ranges from examining how Aboriginal people can play active roles in the management  and development of policies governing Aboriginal cultural heritage resources to understanding how traditional lands that have existed over thousands of years were utilized by the ancestors of the Cree communities situated in the central Churchill River Basin in Saskatchewan and Manitoba.  My role is to help develop a technique to characterize quartz quarries in northern Manitoba.  We will also analyze quartz artifacts by SIMS using a quartz hydration dating technique developed by Ericson (University of California, Irvine) and colleagues.