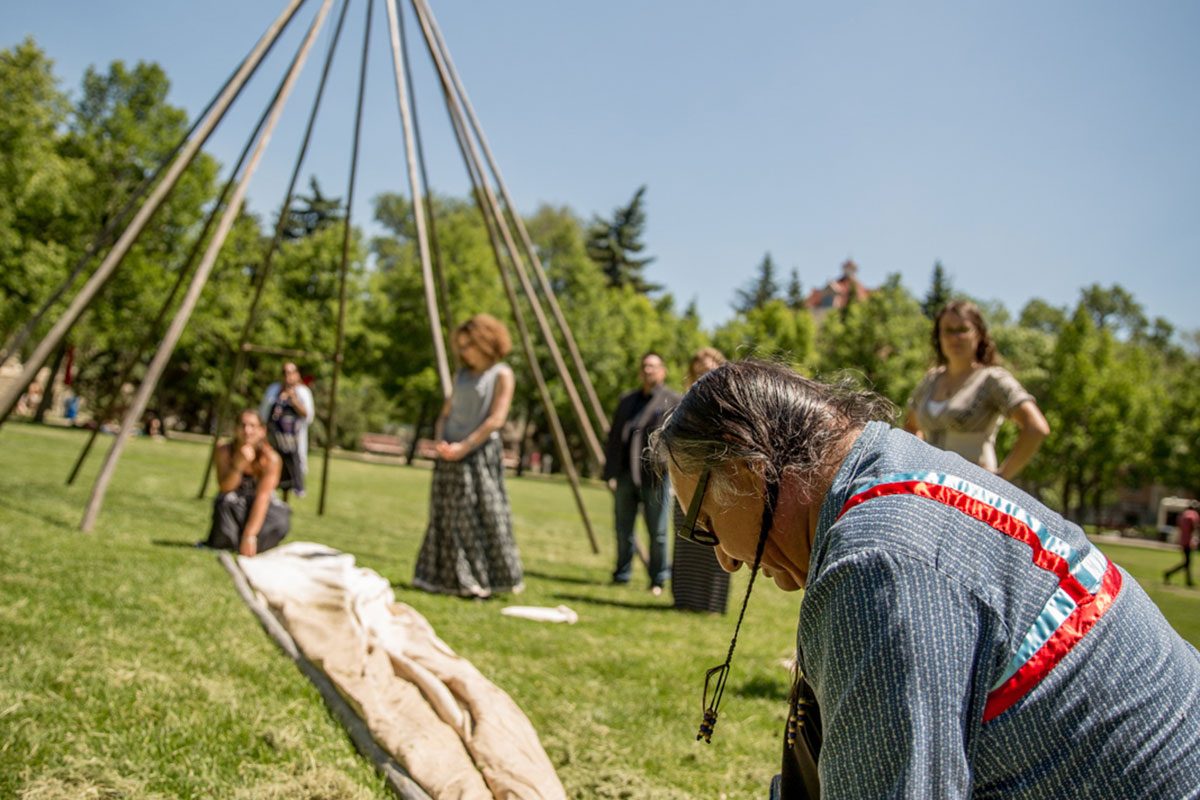 In 1877, the University of Manitoba was the first university established in Western Canada. Established for educating children of the fur trade (and specifically Métis sons of the Red River settlement), the U of M is situated on Treaty One and the traditional lands of the Dakota, Anishinaabe, Cree, and Oji-Cree, and the homeland of the Métis nation. Even with this history, Indigenous peoples had a complicated relationship with the U of Manitoba for a myriad of factors, and few attended the institution until the 1960s.

By 1970, Indigenous peoples in Canada were in the midst of a social revolution. Following the widespread rejection of Trudeau’s 1969 White Paper, cultural and political organizations began to form to advocate for Indigenous peoples, their cultures, and communities. It was an exciting and inspiring time.

In 1970 the University of Manitoba included 13,377 students – of whom approximately 50 were Indigenous. Students would comment they felt isolated physically and culturally while on campus, sometimes going days or weeks without seeing another Indigenous person. Services for Indigenous-specific student needs were non-existent. Some experienced racism in and out of the classroom as well. Many wanted to practice and utilize knowledges from their cultures and communities in their academic and social life.

Uniting together, 11 Arts and Education students formed the Indian Métis Eskimo Student Association (IMESA) to advocate for Indigenous issues and inclusion on the campus of the University of Manitoba. Led by inspiring young leaders like Elijah Harper, this community selected an executive that included President Ovide Mercredi (future National Chief of the Assembly of First Nations) and fellow students Reg Blackbird, Albert Stevens, Émile Garson, Yvonne Monkman, and John Allooloo.

Following a set of collective rules based on consensus and ongoing dialogue, IMESA fought tirelessly to support Indigenous students on campus, throughout Manitoba, and across Canada. They successfully negotiated for a permanent office with university administration and held social events to help form an ongoing community presence. Throughout the 1970s, Indigenous students like Robert Houle (arts), Kenneth Young (law), Marion Meadmore (law), Verna Kirkness (arts and education), Murray Sinclair (law), and Moses Okimaw (law) found support through IMESA and translated this into successful careers.

One of IMESA’s most lasting impacts was in advocacy. In January 1971 the U of M’s engineering student’s newspaper The Cursor published an article about a ‘pub crawl’ in downtown Winnipeg entitled “Where Winos Meet and Prairie Dogs Crawl,” which used racist and demeaning comments about Indigenous peoples. Responding quickly, IMESA met with the Faculty of Engineering and staff at The Cursor (receiving an apology), published articles on Indigenous history and culture in The Manitoban, and focused on a broader, university-wide educational goal: a Department of Native Studies.

In the fall of 1971 members of IMESA offered a course called “Native Views” at an initiative called UM Free You, a co-operative learning project operating in the city of Winnipeg. “Native Views” was a community-driven course aimed at “cover[ing] a wide range of topics from native history (what really went on) to contemporary activities and problems” and “to forge links between the native peoples and white people.” The course was so successful 20-60 students attending weekly, amongst them Prof. William “Skip” Koolage from the U of M’s Anthropology Department – who gained so much from the course he invited student Ovide Mercredi to co-teach the first-ever course in Native Studies at the U of M entitled “Native Peoples of Canada” in 1973. The class, which incorporated aspects of anthropology, sociology, history and economics – set the groundwork for much of the interdisciplinary work the field is in today.

The establishment of this course – along with the constant work of IMESA and its allies (and specifically Dave Courchene of the Manitoba Indian Brotherhood) – brought about the formation of the University of Manitoba’s Department of Native Studies in 1975. Although not all departments within the university supported the establishment of a Native Studies Department, professors from across disciplines worked together to assist this effort including Koolage, Jean Friesen, and Joe Kaufert. Soon after, the university hired three Indigenous staff members: Dr. Raoul McKay (Department Chair), Stan Cuthand, and Emma LaRocque – who would later get her doctorate from the University of Manitoba. The hiring of these three remarkable thinkers was not only impactual but it demonstrated a groundbreaking path in recognizing the importance of Indigenous scholarship.

In the spring of 1982, administration at the U of M suspended the department, citing downsizing, decreased funding, and the loss of staff. The community responded in an uproar led by Dr. LaRocque to re-establish it. Appearing on radio and television, writing letters, and meeting with administration, these efforts were successful – and the department was re-established as a result.

Throughout the past 40 years, the Department of Native Studies has gone through a number of changes. After decades of successful undergraduate courses, in the 1990s an interdisciplinary graduate program on Native Studies was established in the Faculty of Graduate Studies. In the early 2000s, this interdisciplinary graduate program was incorporated into the Department of Native Studies and continues today with over two dozen current Masters and PhD students. In 2009 the Department began a PhD program, admitting its first student. These students study a range of topics including, but not limited to, art, kinship, politics, land claims, and literature. These students are advised by faculty members that work within the department to further possibilities for students.