Current research interests, activities and recent/selected publications of faculty members are described below. To contact a faculty member please refer to the Faculty Directory.

Tuberculosis and the sanatorium era in Canada; the rise of the Medical Arts Building in Canada; dengue disease in Bangladesh; health and illness in colonial era Antigua and St. Kitts

My research in societies in transition deals with the effects of political and economic transformations on citizens’ claims and practices around human rights. I examine these dynamics in the transition from socialism to capitalism in Ukraine, and in the reverse transition from capitalism to socialism in Venezuela. I am particularly interested in the ways in which young people fashion themselves as moral subjects under conditions of rapid social change. Thus, my ethnographic research focuses primarily on young populations and the creative ways in which they partake in politics and navigate the challenges and contradictions associated with global capitalism. My most recent work addresses the issue of youth participation in mass protest and the process of self-radicalization.

Funded by a Social Sciences and Humanities Research Council (SSHRC) Insight Development Grant, my new project “Institutionalized Youth Self-Governance and the
Dynamics of Social Intervention in Venezuela” deals with youth self-governance as a strategy for tackling socioeconomic inequality and youth problems in Caracas. I track the social practices through which young people define and manage their peers in situations of vulnerability and examine the possibilities and challenges of peer governance and policing where cleavages of race, class, religion, and citizenship exist among youth as a group.

n.d.      From Self-Invasion to Immobile Refugees: Contested Mobilities in the Ukrainian-
Russian Conflict. Under review.

n.d.      Between Mob and Multitude: Popular Ambivalence Toward Mass Mobilization in a Youth-
Led  Protest Movement. Under review.

My research examines social complexity in food producing societies. My particular interest is in how we use pottery function, style and technology to understand past lifeways.

My approach to the study of pottery is interdisciplinary, insofar as I pursue combinations of ethnoarchaeology, ethnography, experimental archaeology, geochemistry, in addition to conventional pottery analysis methods to explore how archaeologists can improve our inferences about social behaviour through the study of pottery function, style and technology. My current research involves four projects: one investigating the relationships between social boundaries and identity in modern Zulu pottery producing communities southern Africa; a second examines how nineteenth century Zulu military towns provisioned its inhabitants; a third investigates pottery technology to inform us about the development of craft specialisation in early urban centres of the Near East; and a fourth involves examines how pottery was made in Late Woodland societies in Manitoba.

Currently Professor of Anthropology, Director of the Near Eastern and Biblical Archaeology Lab, and Coordinator of Judaic Studies at the University of Manitoba, Winnipeg, Canada. He is an anthropological archaeologist whose research focuses on the evolution of early agricultural and early complex societies in the Old World (Europe, Africa and Asia) from the Neolithic to the Iron Age. Geographically, his research covers a large swath of Old World societies, from Europe through the Near East and into Africa. He is currently co-director (with Prof. Aren Maeir, Bar-Ilan University, Israel) of the excavations of the Early Bronze Age city at Tell es-Safi, Israel, the Canaanite precursor of the famous Philistine site of ancient Gath (home of Biblical Goliath).

Funding exists for students to do theses on topics related to the excavations of the Early Bronze deposits at Tell es-Safi/Gath, Israel.

4.      Greenfield, Haskel J. 2013 “The Fall of the House of Flint”: a zooarchaeological perspective on the decline of chipped stone tools for butchering animals in the Bronze and Iron Ages of the southern Levant. Lithic Technology 38 (3): 161-178.

Dr. Hoppa is a physical anthropologist whose research focuses seeks to answer questions regarding the relationship between health and mortality, and changing social, economic and cultural conditions. Interests include: Osteology; Bioarchaeology; Skeletal Growth & Development; Medieval Denmark; 3D Imaging in Bioarchaeology; Palaeodemography; Age estimation from the Skeleton

His current interests focus on the bioarchaeology of  medieval and post-medieval Denmark.

Elias J, Luptin C and Hoppa RD (2012) Evidence of Trepanation in a 26th Dynasty Mummy from Akhmim, Egypt.Proceedings of the 7th World Congress on Mummy Studies, San Diego. (in press)

Gamble J, Blackburn A and Hoppa RD (2012) Congruence of Methods for Determination of Sex using Real, Virtual and 3-D Printed Specimens. In Zhou M, Romanowska I, Wu Z, Xu P and Verhagen P (eds), Revive the Past (Proceedings of the Annual Meetings of the Computer Applications and Quantitative Methods in Archaeology), Beijing. Pallas Press pp. 132-140.

Rosendahl W, Begerock A-M, Gill-Frerking H and Hoppa RD (2011): Think About the Children: An Extraordinary Peruvian Mummy from the Collection of the Reiss-Engelhorn-Museen in Mannheim, Germany. Yearbook of Mummy Studies 1: 153-158.

I completed a Joint Ph.D. in Anthropology and Cinema and Media Studies at the University of Chicago and my research reflects this dual training, focusing on film and digital media in socialism and post-socialism with an ethnographic concentration on Cuba. My current book project is about the convergence of political ambivalence, paranoia, and aesthetic indirection in post-Soviet Cuban filmmaking. Since the late 1980s government officials have increasingly attempted to contain dissent not just through repression but rather by providing it with a forum in cinema and other arts, a strategy that I argue has paradoxically exacerbated political paranoia. Combined with filmmakers’ increasing orientation towards the global market, this new repressive tolerance leads many to suspect that critical films are designed either to improve Cuba’s international image or appeal to spectators eager for images of socialism on the decline. I track how filmmakers turn to allegory, irony, and other forms of aesthetic indirection in ways that both disrupt these paranoid readings of their work and capitalize on demands for criticism of life in late socialism. I have also begun research for a new project on digital media in Cuba after Raúl Castro’s ascension to the presidency. Here one of my interests is in the Cuban state’s de facto legalization of media piracy through the licensing of small-scale vendors of pirated DVDs and what this reveals about changing views of property on the island.

2012       “Symptomologies of the State: Cuba’s ‘Email War’ and the Paranoid Public Sphere.” Digital Cultures and the Politics of Emotion: Feelings, Affect and Technological Change. Editors, A. Kuntsman and A. Karatzogianni. Basingstoke and New York: Palgrave Macmillan.

2010       “Film Review: the illusion by Susana Barriga.” E-misférica 7, no. 1. http://hemisphericinstitute.org/hemi/en/e-misferica-71/laura-zoehumphreys-

My main interest is human-environment relations, with a focus on the fisheries of Gujarat, India, although I dabble elsewhere and in other subjects.  Other keywords: food, change, political economy/ecology, relationality, governance, development, small-scale fisheries.

In keeping with the complexities of the human-environment problems that interest me, I work most commonly in collaborative interdisciplinary research projects to which I seek to bring an anthropological sensitivity. I see a central role for student research and training in the context of these kinds of projects and I get a great deal of satisfaction from working with students. To date, I have funded fully or partly five Master’s students, one PhD student, and two Post-doctoral Fellows. I do not currently have any funding opportunities for students.

Current Research Projects (as of August 2014):

Derek Johnson and Maarten Bavinck (2010). Social Justice and Fisheries Governance: The View from India. Proceedings of the Sharing the Fish Conference. FAO. Rome.

Micaela Trimble and Derek Johnson. (2013). Artisanal fishing as an undesirable way of life? The implications for governance of fishers’ wellbeing aspirations in coastal Uruguay. Marine Policy 37: 37-45.

Sarah Coulthard, Derek Johnson, and Allister McGregor. (2011). A Social Wellbeing Approach to Poverty and Sustainability in the Context of the Global Fisheries Crisis. Global Environmental Change 21: 453-463.

Derek Johnson. (2010). Institutional adaptation as a governability problem in fisheries:  patron-client relationships in the Junagadh fishery, India. Fish and Fisheries 11(3):  264-277.

My research has explored conflicts over resources in South America, focusing on mining activity and related controversies over pollution, water scarcity, community rights, and corporate accountability.

2013. Contested Equivalences: Controversies over water and mining in Peru and Chile. In: John Wagner (Ed.). The Social Life of Water. Berghahn Books.

2011. Engineering Responsibility: Environmental mitigation and the limits of commensuration in a Chilean mining project. Focaal: Journal of Global and Historical Anthropology, vol. 60.

Milne, S. Brooke
2013   Review of “Technology and Tradition in the Eastern Arctic, 2500 BC - AD 1200: A Dynamic Technological Investigation of Lithic Inventories in the Paleo-Eskimo Traditions.” Canadian Journal of Archaeology 37:349-353.

I am continuing with the Toquaht Archaeological Project faunal analysis, specifically aDNA and ZooMS identification of whale and rockfish remains and stable isotope analysis of clamshell and rockfish incremental growth structures.

Submitted or In Press

The Fauna from Ma’acoah (DfSi-5): a descriptive report. (ca. 100 pages of text, 50 tables, 25 figures, appendices). To be archived online at MSpace, University of Manitoba. 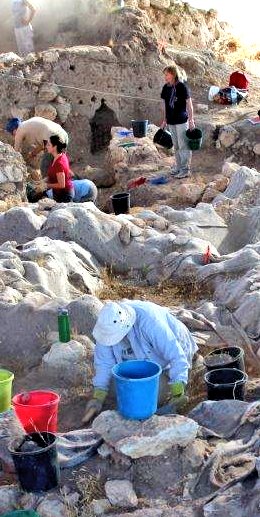 Professor Greenfield and students
at an archaeological field site in Israel.