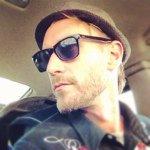 He is the founder of Alchemical Press and is always on the lookout for literary oddities. He puts words and pictures together. Some people call that alchemy. He calls that comics.

You can follow him on twitter @gmbchomichuk and see some of his work in progress at http://www.comicalchemy.blogspot.com/.