The University of Manitoba campuses are located on original lands of Anishinaabeg, Cree, Oji-Cree, Dakota, and Dene peoples, and on the homeland of the Métis Nation.

The University of Manitoba is committed to a renewed relationship and dialogue with First Nations, Métis, and Inuit peoples based on the principles of mutual trust, respect, and reciprocity. We respect the Treaties that were made on these territories, we acknowledge the harms and mistakes of the past, and we dedicate ourselves to move forward in partnership with Indigenous communities in a spirit of reconciliation and collaboration.

The University of Manitoba is committed to ensuring that First Nations, Métis and Inuit knowledge, cultures and traditions are embraced and reflected in the pursuit of its mission.

« Previous: Consultations: What We Heard
Next: Strategic Priorities » 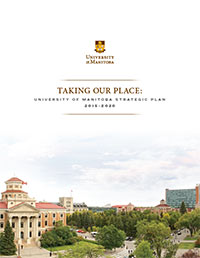