As the University of Manitoba plans its budget allocation for 2015/2016, many questions have arisen from faculty, staff, students and the greater community about the University’s current state of finances and the effect the projected fiscal restraints will have on them. The University is committed to being transparent and forthcoming with information during the budget process.

The University of Manitoba is projecting at least a $10.5 million budget shortfall for the 2015 – 2016 fiscal year due to rising salaries and operating costs that are anticipated to exceed expected revenues. The University is required by law to achieve a balanced budget every year. As a result, the University of Manitoba will need to consider unit budget reductions that will average between three and four per cent in each of the next two years.

Why are we in the position of having a budgetary shortfall?

The costs of operating continue to increase at a faster pace than any increases in revenue. Most revenue for the University comes from the provincial government grant and tuition and fees paid by students. The operating grant funded by the Province is expected to increase between zero and 2.5 per cent for 2015-2016. Tuition fees will increase in step with inflation. In 2015/2016 general operating expenses are estimated to increase by 3.1 per cent. 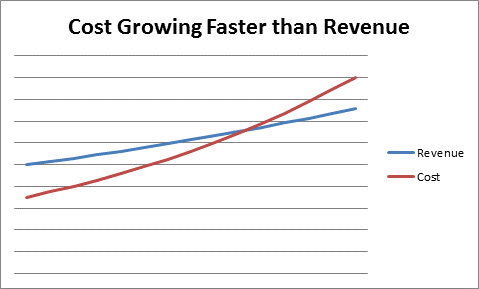 The University of Manitoba has been underfunded for years as a result of the combined impact of low government grants and limits on the growth of tuition fees. Many costs, such as salaries, library acquisitions and utilities, rise faster than the rate of inflation. There are few revenue growth opportunities to make up for the shortfall. Annually, units spend $40 - $50 million on capital expenses out of the University’s operating budget because government capital funding in support of renovations and equipment has remained static at $3.02 million for decades and does not fully address the University’s capital requirements.

What are the priorities?

We are committed to sustaining the fabric of the University during times of financial difficulty, now and for future generations. The University will make decisions guided by the new strategic plan, which reiterates the University’s longstanding commitment to an outstanding student experience and a positive working environment.

Will jobs be lost?

We understand that some may feel anxious and concerned about how changes may affect jobs. There may be impacts on some positions as units implement their strategic plans but they will first look at retirements, attritions and voluntary resignations as ways to meet budget requirements. In the event of reductions, supports will be extended to affected employees. These supports can include EAP benefit extensions, employment transition support and severance pay and/or working notice.

Our tuition rates are legislated to rise only at the rate of inflation. We currently have the third lowest tuition fee rates in Canada. At the same time, we are committed to increasing financial support for undergraduate and graduate students. In 2014/2015 the University redirected $750,000 to increase graduate student financial support and an additional $250,000 for undergraduate scholarships.

Will programs be cut?

The University will make decisions in a way that aligns with its strategic priorities. We are committed to the establishment of Faculty program sustainability plans and developing a process for determining and ensuring program sustainability across the University. We are invested in increasing opportunities for experiential learning through increased opportunities for community service-learning, co-operative education, undergraduate research, and student exchanges.

Has the University exhausted all other options?

The University is mandated to balance its budget but is also committed to a continued delivery of high quality programs and services. The President regularly engages government at the provincial and national levels to address funding issues and will continue to do so, however, expecting a funding increase that will fully meet our needs is not realistic at this time.

In the past, the University has looked at ways to improve administrative efficiency and reduce costs and this is a process that units across the University continue to pursue to help bring rising costs in line with the current revenue reality.

Why is the University spending money on support services and non-academic units when it is cutting courses and not filling academic positions?

The University is working to achieve the goals set out in the strategic plan, which was developed in consultation with over 1,200 faculty, staff, students and alumni. Non-academic investment is essential in order to support the university in the pursuit of its mission. As we move forward with the budget, we will be looking on both the academic and non-academic side for programs and activities that no longer serve our mission and goals.

Is the University not able to tap into the reserve fund to meet this shortfall?

The University has funds in reserve, but they are virtually all committed. Tapping into these funds would result in the cancelation of upcoming projects and purchases that were being counted on to support the University’s teaching, research and service goals. Much like a household budget, those funds also serve as an important cushion in the case of an emergency or unexpected situation. The University has set aside just over two months’ annual expenditures for a reserve, which is actually low in comparison to other Canadian universities. While we could dip into reserve funds to cover this shortfall, it would not be fiscally responsible to do so as it would only solve the problem for the short term and not address the issue of costs rising faster than revenue.

What are the current commitments in the reserve fund?

One of the largest reserves as at March 31, 2014 was Specific Provisions (~ $77M) set aside to fund approved faculty- and unit-based carryover allocations and specific purpose provisions, approved IST projects not completed in 2013/14, mandatory pension payment funding, self-insurance reserves, major equipment replacement and other special project funding.

Why is money being shifted money out of operating funds, which could be used to support academic programs, into capital funds?

In each of the past several year-ends, approximately $40 to $50 million has been transferred from the operating fund to the capital fund.

The reason is fourfold:

1. In accordance with Canadian Public Sector Accounting standards, purchases made with operating funds but deemed a capital expense must be recorded in the capital fund. When a faculty/unit purchases a capital item (e.g. equipment, computers, etc.), the expenditure is subsequently reported as an inter-fund transfer out of the fund that paid for the item (i.e. operating) with an offsetting inter-fund transfer into the capital fund.

2. Due to insufficient provincial capital grant funding for renovations and equipment, operating funds are used for unit based capital projects and initiatives.

3. For the U of M’s approximately $2 billion in capital assets, provincial capital funding for infrastructure renewal has also been insufficient. As a result, the U of M must also redirect operating funds to partially address the deferred maintenance backlog of $312.1 million.

4. Debt-servicing costs funded from operating (for example, the technology fee collected from students as part of the approved debt-servicing plan) are also transferred to the capital fund.
At year-end 2014, $42 million in operating funds was transferred to the capital fund (excluding debt-servicing). This represents capital items that were either committed or spent. Some examples of these transfers are noted in the chart below.

Debt servicing costs funded from operating (for example, the technology fee collected from students as part of the approved debt servicing plan) are also transferred to the Capital Fund.

Spending on Academic Support at the U of M ranks high in comparison with other U15 universities, as illustrated in the figure and chart provided, demonstrating a focus on supporting the academic mission of the University. 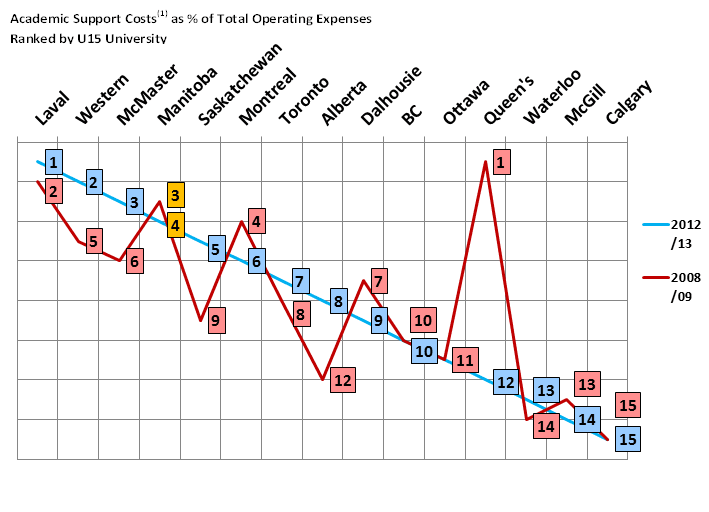 (1) UM Data has been restated to proportionate pension costs.

Due in part to finding efficiencies where possible, spending on the University’s administrative costs(1) as a percentage of total operating expenses has been consistently low in comparison to other U15 universities over the past four years. 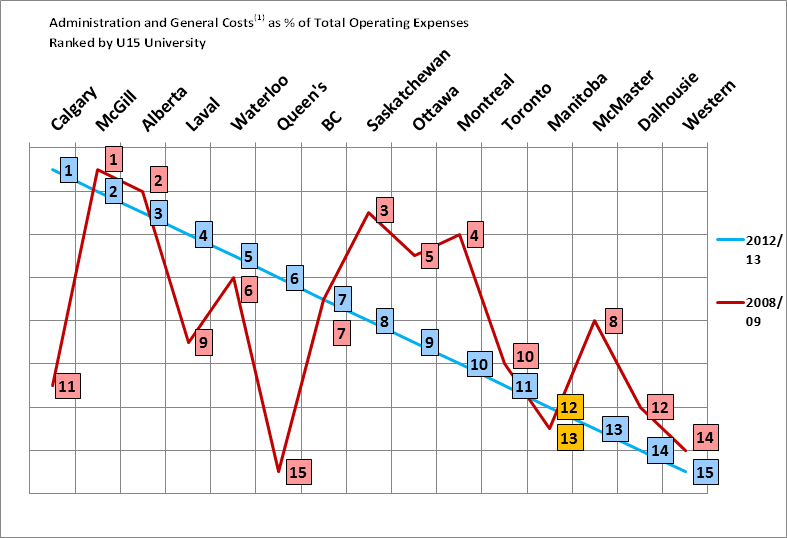 (1) UM Data has been restated to proportionate pension costs.

Administration and General Costs, as defined by CAUBO, include activities and related expenditures in the two broad areas of Academic Administrative Support and Other Support/Administration services.

* Founded in 1937, CAUBO is a non-profit professional organization representing the interest of administrative and financial officers in Canadian universities and affiliated colleges. It is an umbrella organization for the many players in university administration

What is the forecast shortfall given the latest news from the Province on tuition?

A. The Province has announced that tuition fee increases for the 2015/16 academic year must not exceed 1.9%. Initial budget planning was based on permitted tuition increases of 1.5%. A 1.9% tuition increase would lessen the projected budgetary shortfall by about $430,000.

Where do I go for updates?