In May and June of 2019, 10 of Manitoba’s newest archaeologists undertook excavations at Seven Oaks House Museum as part of the University of Manitoba’s archaeological field school. Seven Oaks House Museum features a Georgian manor, general store, and grounds that once belonged to the Red River Settlement’s prominent Inkster family. John Inkster, a former stonemason from the Orkney Islands, came to the Red River Settlement in 1826 with his wife, Mary Inkster (nee Sinclair). Mary (herself, the daughter of a prominent Hudson’s Bay Company administrator) and John had eleven children together, nine of whom survived to adulthood.

The grounds of the Seven Oaks House Museum were home to members of the Inkster family from 1831 until 1954, and were home to Indigenous families for many, many years before that. Artifacts found during the field school range from pre-contact Indigenous pottery to early twentieth century plastic goods. They tell us about the big changes that came to the centre of the continent over the last 600 years, as well as the story of a well-off Anglo-Métis family with commercial connections to eastern Canada, the United States, Britain, and even Japan.

Every year we spend at the Seven Oaks House Museum, we learn more about Winnipeg’s past. This August, the finds of the 2019 field school contributed to a special exhibit on recreation and leisure in the Red River Settlement. 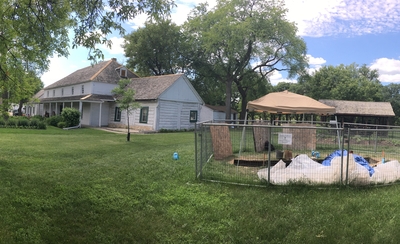